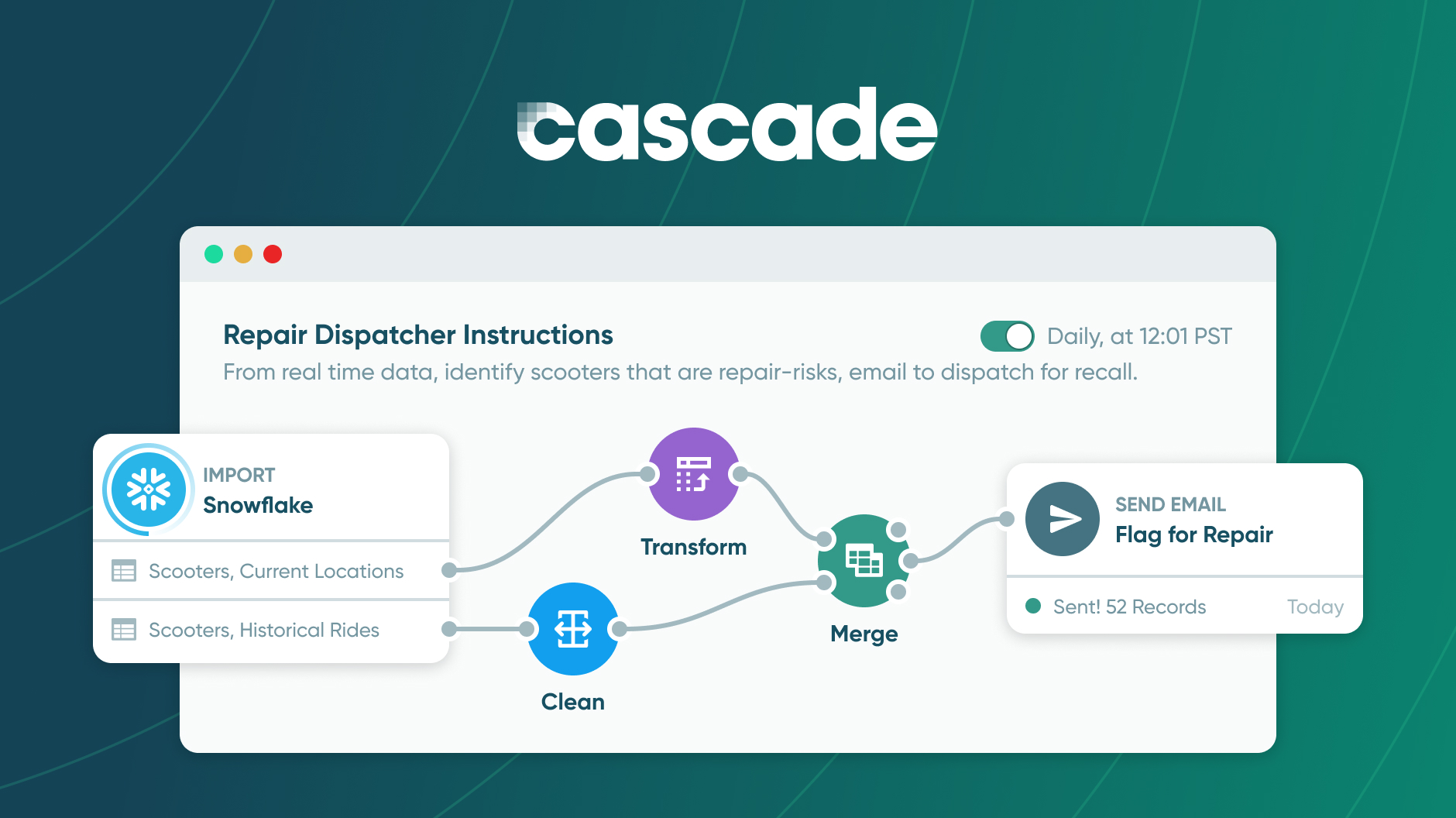 Back in 2018, Jon Brelig was sitting at an all-hands meeting for InfoScout, the consumer insights company he founded years prior and served as CTO. Up on stage was a dreary-eyed internal consultant named Calvin, presenting an analysis he had built for a marquee customer. He had just completed the deliverable: a set of 150 reports, each with a slightly different cut of a dataset and analysis built on top of that data. Blown away by the scale of the project, Jon asked Calvin how he did it. The consultant revealed that he had been up all night, manually changing values in a spreadsheet and exporting the reports one at a time. Jon and the other engineers in the room promptly fell out of their chairs.

Many months later (and after InfoScout’s acquisition), Jon was grabbing martinis with his friend Jake Fuentes, whose company Level Money had been acquired by Capital One. Jake was lamenting the data breadline that had accumulated at his acquiring company: dashboards were everywhere, but data engineers were still overwhelmed with requests to get specific data to specific people. Capital One was a highly analytical place — a good thing for the business, but it just made the problem worse.

After comparing war stories, the two founders looked at each other thought maybe this is the same problem. A picture started to form: if folks like Calvin were able to build the equivalent of data scripts, it would dramatically improve the speed with which businesses can move. But the right tool could also allow non-technical, data-savvy professionals to build like engineers — they could build systems rather than being the system. Cascade.io was born.

Two years later, the need for nontechnical teams to be able to automate their data workflows is even clearer. Most companies today have more data and dashboards than they know what to do with, and somehow business users still feel like they're flying blind. As the world of data tooling has exploded, we've collectively (and wrongly) presumed that if anyone can access any metric at any time, they're also getting the right data at the right time.

This problem is especially acute for operations teams. Whether it's a scooter operator coordinating dispatchers, a recruiting company coordinating talent assignment, or a produce logistics company planning routes, ops-heavy businesses rely on the timely delivery of specific numbers in order to run. Those ops teams should not have to rely on engineering to ensure data gets to the right places.

Today, we're thrilled to introduce Cascade.io, a no-code data workflow tool built to ensure the right data gets to the right people at the right time. Cascade allows nontechnical users to build workflows that translate raw data into the numbers they need to drive their process, then lets them set those flows on autopilot. They do that by connecting to data, manipulating and analyzing it with a no-code transformation toolkit, then automating their work by pushing the results to the people and systems that need it.

Let's go through those pieces in order.

Cascade integrates directly with popular databases, including Snowflake, Redshift, Postgres and others. We know that warehouse data often needs to be combined with other datasets to be truly actionable. That's why Cascade also supports connections to Google Sheets and flat files, and soon it will support APIs and online file stores.

Transform with a no-code toolkit

Once data is imported, Cascade offers a range of tools to allow analysts to craft the data they want. Tools range from adding columns and pivot tables to fuzzy matching and running regressions, and all are designed for the analyst who has mastered Excel but would rather not code. Cascade's canvas lays out the transformation logic visually, allowing anyone to trace exactly what's happening in a workflow.

Once analysts have what they want, they can push the results out via email, update a Google Sheets file, or send it back to a database for other apps to use. The entire workflow can then be easily scheduled, freeing up the analyst to focus on building and improving their process rather than delivering data.

Lastly, the entire experience is fully collaborative out of the box. As a browser-based experience, Cascade offers first-class multiplayer support, allowing teams to work together and build on each others' work.

Built for the modern data stack

As a cloud-native, browser-based solution, Cascade is designed for the modern data stack. Cascade makes it easy to connect to cloud-based data warehouses, and in the future we'll have direct hooks into dbt and workflow orchestration engines.

As the modern data stack expands into new markets, push-based automation is becoming a critical piece of the puzzle. For companies with complex operations and dynamic datasets, it's not enough to provide visibility across all data sources. To avoid data overwhelm, that visibility must be translated into actionable, just-in-time feeds built by the people who know the business best. That's where Cascade comes in.

We're thrilled to announce the support of an incredible group of investors: we raised a $5.3 million seed round led by First Round Capital. The round was completed by Redpoint Ventures, Susa Ventures and Expa along with angels like Nat Turner, Jared Schreiber, Lenny Rachitsky and many more. We are so grateful for their early belief in our mission.

From here, we're focused on perfecting the product experience, supporting larger datasets and workflows, and building deeper integrations with other tools our customers use. If we are to truly give anyone the power of data automation, we have a lot of work to do!

If it sounds like Cascade can help you automate your work, please let us know here or email hello@cascade.io.

This is a data app, built without code

Cascade allows anyone to build elegant, sharable apps using data -- without using code.
Build your own

Get Started with Cascade

Start building automated workflows and data apps, all without code.
Get Started Now